An Impression of a Lifetime: Mike Woods, Tattoo Artist Extraordinaire

He’s a master of his craft; he’s a creator of vision and art, and a father to a year and a half year old son who, when he talks about, his entire face lights up like the Vegas strip. He is tattoo artist Mike Woods. Working along side some of the best Houston has to offer, Mike has been known for not only his originality, but the beautiful vivid colors he chooses in his tattoos. Around 90% of his clientele are repeat satisfied customers. When asked how he broke into the business, he explains how his father was the main inspiration. “I was really close to my dad emotionally. One day, he came home with a tattoo on his chest and I was, like, ‘oh my god, I want one. I want to do them.’” It wasn’t long before Mike was tattooing his own family members and doing what he loves best.

The tattoo industry is a challenging and rather lucrative industry to break into as Mike has thoroughly explained it to me. But, being the persistent person he is, he didn’t care. Whatever it took, wherever it took him, he wanted it. That’s the type of artist you want crafting your tattoo for the entire world to see. Seven years later, Mike’s vision still stands. “We want to give you something that people will want to stop you and ask where you got that done.” And, his work speaks for itself. Ten’s of thousand’s of tattoos later, Mike Woods is at the top of his game and is only getting better.

Taking on an average of two appointments a day, five to six days a week, he still gets the best of both worlds; doing the job he loves and being a loving father. Often being misunderstood as a degenerate youth in today’s ever-changing society, tattoo artists are pushing themselves to be the best at what they do not just for the well-deserved attention it brings them, but because they truly love it. “The industry itself is growing and evolving. It has exponentially grown over the last five years.” Gone are the days of bad biker tattoos. Today, it’s about changing and displaying a beautiful piece of art. “As an artist, you never want to grow stagnant.”

Mike Woods is a multi-dimensional artist of his time. Armed with his notepad in one hand and nothing but beautiful concepts in the other, Mike wants you to know that if you intend on getting tattooed, there are a few concepts you need to fully comprehend before setting foot in that place. “Open mindedness in the industry definitely needs to be stressed. This is permanent and the good artists are going to be booked in advance. Patience is a must.”

When you’re a tattoo artist, sometimes the things you love must take a back seat. Luckily for Mike, that is not the case. “Being a tattoo artist is definitely not cohesive or conducive to a family life especially being a male tattoo artist as most clientele are female. It takes a very special individual to be able to put up with that. I’ve been fortunate enough to be prevalent in my son’s life. I didn’t want to choose between my two passions. We make it work.” It’s here where you can clearly see his desires in life and that he will stop at nothing to grab hold of what he wants. 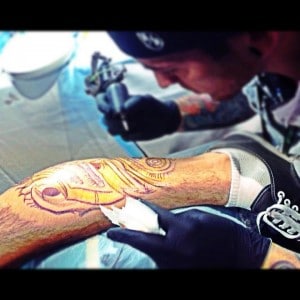 As we wrap things up and I thank Mike for letting me invade the plush couch at his studio Artistic Impressions, he wants patrons of Houston to think about a few things if a new tattoo is on your horizon. First, it’s not about “trinket” tattoos anymore. It’s about art. Secondly, good tattoos are not cheap. Similar to life in general, you get what you pay for. This is not the time to be frugal.

Lastly, do your research. Mike says a good place to start is the website Tattoonow.com. “It’s all about the experience. Go into it excited. Feel confident that the artist you’ve chosen is going to take good care of you. That’s why it’s important to have a face-to-face consult. If you have doubts, walk away.” If Mike Woods’ brain was a galaxy of its own, there would be a million stars in it. Each one represents an artistic design handcrafted for the exclusive and esoteric. And, the beauty of this is that stars are being born everyday.