The City of Houston will re-launch Sunday Streets Houston this fall. A portion of a great Houston street will close to motorized traffic from 12 pm to 4 pm on October 12, November 2 and December 7. With no cars on the road, Houstonians will enjoy these streets for walking, running, dancing or riding with friends and family.

The planned Sunday Streets Houston will open for pedestrians and bicyclists in designated streets in The Heights, Third Ward/Museum Park and East End/Fifth Ward areas. Visit www.gohealthyhouston.org/sundaystreetshtx for more information and help spread the word. 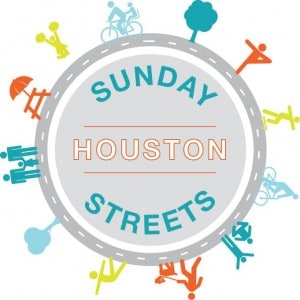 . An average of 20,000 Houstonians attend each event

. The majority of participants are introduced to businesses that they didn’t know existed

. After attending Sunday Streets, roughly half of participants say they are more likely to walk or bike to destinations in the neighborhood
On average, participants got 2/3 of the Center for Disease Control and Prevention’s recommended guidelines for physical activity (150 minutes per week)