The National Rifle Association (NRA) is pleased to announce this year's Annual Meetings and Exhibits to be held at the George R. Brown Convention Center in Houston, Texas from May 3-5, 2013.

More than 65,000 attendees are expected at this year’s Annual Meetings and Exhibits, making this one of the largest in NRA’s 142-year history. Leading firearm manufacturers will display the firearm industry’s latest and greatest products. Guides and outfitters, various hunting and shooting accessories, and an extensive private collection displayed by NRA-affiliated gun collector clubs will fill acres of convention space.

NRACountry, a proud partnership between NRA and country music's brightest stars, is pleased to present NRACountry Jam III at the 3rd floor of the Houston Convention Center on Friday, May 3. This year's headlining act is the Eli Young Band. Doors will open at 6:00 p.m.

NRA’s Stand and Fight Rally will take place Saturday, May 4, at 7:30 p.m. Glenn Beck, political commentator and host of the Glenn Beck Program, will be the featured speaker for the evening. Guests will also be treated to a rousing performance by superstar comedian and impressionist Frank Caliendo. 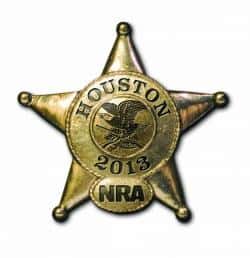 NRA’s Annual Meetings and Exhibits provide a safe and fun atmosphere the whole family can enjoy. The ever-popular air gun range is a top attraction – both for participants and observers. NRA offers diverse seminars throughout the three-day convention, including methods of concealed carry; hunting; Firearms Law; the Grassroots Workshop; and Refuse to Be a Victim®.

-NRA-
Established in 1871, the National Rifle Association is America's oldest civil rights and sportsmen's group. More than four million members strong, NRA continues to uphold the Second Amendment and advocates enforcement of existing laws against violent offenders to reduce crime. The Association remains the nation's leader in firearm education and training for law-abiding gun owners, law enforcement and the armed services. Be sure to follow the NRA on Facebook at www.facebook.com/NationalRifleAssociation and on Twitter @NRA.