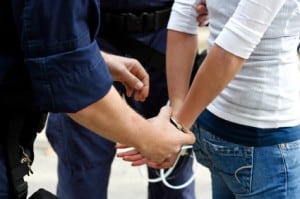 "A Houston woman said she was wrongfully arrested by police for holding up a 'speed trap' sign near where an officer was pulling over motorists.

Natalie Plummer said she wrote 'speed trap' on a grocery bag and held it at the roadside on West Dallas June 21 after she spotted an officer pulling motorists over while she was riding home on her bicycle."

Natalie Plummer is a folk hero who was performing a public service, by warning motorists to slow down. Plummer wasn't obstructing justice as the arresting officer initially claimed, she was merely being a good citizen.

Plummer was on her way to a health food store on her broken-down old bicycle when she saw an officer randomly pulling drivers over, and instead of going on her merry way, she got involved. Plummer deserves the gratitude of the public, and a key to the city of Houston.

Plummer is green-friendly, conscientious, and extremely hot to boot - Houston needs more solid citizens like her.

Plummer was only cited with a misdemeanor count of walking in the roadway where there is a sidewalk present. The concerned citizen claims she was on the sidewalk, and I believe her.